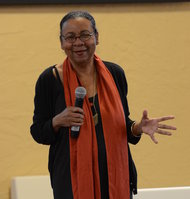 END_OF_DOCUMENT_TOKEN_TO_BE_REPLACED

Well now this is annoying.

A while back I wrote about an article in Salon claiming that researchers had cracked “The Charisma Code.”  A simple “cognitive explanation,” reducible to a cocktail napkin formula of the kind so beloved by precocious undergrads, had been proposed to explain the entire phenomenon.

Now I read that new research is making a (from the headline) “Serious attempt to crack the humor code.”

The idea being that things are funny because they violate us benignly.  No, I’m not making that up.  And yes, one could wonder whether anything that’s benign could actually count as a violation, but …

I spent years in grad school researching the nature of humor under the tutelage of Victor Raskin, one of the leading thinkers in the field, and there’s nothing wrong with the theory that the subject of the article, “comedy scientist” Peter McGraw, is putting forward.  Although … “comedy scientist?”  Really?

(A more precise term might be “associate professor of marketing and psychology at the University of Colorado at Boulder.”)

In fact the basic idea behind “benign violation” as the engine that powers comedy goes back at least as far as Santayana, who proposed that humor comes from the juxtaposition of two unrelated concepts in the same idea.  Which is to say … as with so much research breathlessly reported on by the media … this new research isn’t new.  It isn’t even really research, to the extent that it’s pretty derivative precisely because it hasn’t done its homework on what came before.

But again, it’s not wrong per see … it’s certainly a model that fits a lot of cases.  As per the article: END_OF_DOCUMENT_TOKEN_TO_BE_REPLACED

It’s been a long time since I picked up anything in the formal realm of “Humor Studies” – although it was the topic of my Masters Thesis at Purdue University (Official Home of the “If you’re not educated in 90 days we give you your learning back” guarantee).

But the truth is you learn a lot about people by the jokes they tell.  Not necessarily, as Freud so overstate, their innermost hopes and fears.  But definitely what’s on their minds.

Thus it is a damning indictment in Rudolph Herzog’s study of humor in Nazi Germany, “Dead Funny,” that so many jokes about concentration camps were told from the very beginning.  Not of the “How many Jews does it take to fill an oven” variety – indeed there is a ghastly lack of acknowledgement of the existence of the Jewish people in most of these jokes, as though laws hadn’t been publicly passed against them and a whole segment of the population hadn’t just been uprooted – but a clear indication that they knew they were camps, that people got sent to them, that the propaganda about them being humane was a farce, and that people didn’t come back.

Reading Rudoph Herzog’s account of humor in Germany under the Nazis, I find I can’t get the following joke – told by Jews inside a concentration camp –  out of my mind.

A Jewish village in Eastern Europe has been victimized by the most horrific sorts of attacks, pogroms, and mass shootings.  One of the villagers escapes to the neighboring town and tells everyone what’s going on.  He’s asked:  “And what did you do?” He answers:  “Last time, we recited all 150 psalms instead of the usual 75.  And we fasted on the Day of Atonement.”  “Good work,” came the answer.  “You can’t just sit around doing nothing.”

I find myself asking …

What else could they have done?

END_OF_DOCUMENT_TOKEN_TO_BE_REPLACED

Finck founded the cabaret “The Catacombs” in 1929, and was one of its star performers.  His act got him briefly sent to a concentration camp in 1935, but his fame and notoriety kept him safe – and he wsa released six weeks later when an actress friend who was having an affair with Goring interceded on his behalf.

He kept performing, and this time the subject of his act was to encourage the audience to know how much he could not say.  Asked once by an audience member “what time is it?” he replied “I’m not allowed to talk about that.”  Everyone got the joke. END_OF_DOCUMENT_TOKEN_TO_BE_REPLACED