(This story first appeared in the SF Weekly) 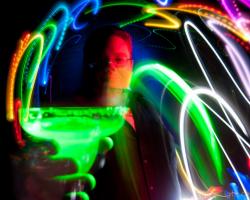 We’re hanging out in Martuni’s, the last great gay piano bar in San Francisco. Once, these majestic animals roamed the hills like mastodon; now, they are nearly extinct. On a good night, it seems like every professional singer in town will show up and open their mouths for free, belting out music like a drunken chorus of angels, as if salvation is guaranteed us all. Then they scatter back to what little of the theater world has managed to remain in the era of Netflix.

My friend Miriam wants to know how I can be so cynical. “Why do you even write about nightlife if you’re so hard on it?” I’ve disappointed her again, but I’m too drunk to care.

The problem is this: The more experienced you are, the easier it is to lose the magic. Tourists don’t get jaded about San Francisco; locals do.

San Francisco’s nightlife, at its best, is a war by a dedicated cadre of locals to extend the magic: to keep ourselves living by keeping it alive. The Beats bled into the hippies, whose bullshit fertilized the ground for an explosive gay culture in the ’70s, which inspired a vital scene in kink. The Suicide Club died out in the early ’80s, but the Cacophony Society rose from the ashes, leading to Santa Con and the Billboard Liberation Front and Burning Man. Veteran Burners returned from the desert and decided to fight the war at home, leading to the Odeon Bar and clown burlesque troops and Camp Tipsy, which in turn inspired the All Worlds Fair, as extraordinary venues shone and vanished in back alleys like fireflies in spring.

END_OF_DOCUMENT_TOKEN_TO_BE_REPLACED

(This story first appeared at the SF Weekly)

Sitting at the bar, nursing a glass of absinthe, Lapo tells me that as a Berkeley student he’d wanted to design his own interdisciplinary major. Then he discovered that if you declared as such, you were forced to take a bunch of classes on “new media” theorists.

This is the moment I knew we’d be friends.

We are sitting in North Beach’s Comstock Saloon, a wonderful bar in which to appreciate the timeless virtues of classicism. A pitch-perfect replica of a turn-of-the-century cocktail joint, it’s all elegantly shaped wood and glass and stone. Jazz musicians perform live from a nook above the main room whose ceiling contains a kinetic metal sculpture that I’m told was installed to fan customers — an early form of air conditioning. If true, this is the secret of what makes the Comstock great: It does the functional aspects of tending bar so well that they come out aesthetically pleasing.

END_OF_DOCUMENT_TOKEN_TO_BE_REPLACED

(This story originally appeared in the SF Weekly)

I was prepping to go to an event I’d helped organize when I got a call from someone telling me that he needed four hours of my time tomorrow to do essential planning for an even bigger, more important event.

“Well, I don’t have time to do both,” I thought, and so I reluctantly decided that I’d have to skip a party I’d helped plan in order to make time to plan another party.

That’s when it hit me: I’ve completely acculturated to San Francisco. After eight years in the city I’m now doing all the things I swore I wouldn’t.

I’ve become an overscheduled, hard-to-reach social butterfly whose calendar decides whether he has time for his friends unless they can hit him up at the right events. When they finally do catch up to me and ask what’s going on, I say things like, “I’m helping plan an art event with an experimental ticket mechanism …” and then ask them to mention my book on social media.

END_OF_DOCUMENT_TOKEN_TO_BE_REPLACED

I’m going to tell you a ghost story. It’s about a bar.

About 13 years ago my friend Colin went to the Odeon. It was locked. He and his friends knocked on the door.

“What time do you open?” Colin asked.

The man at the door thought about it. “We don’t open,” he finally said. “We just occur.”

Colin considered this answer. “Well, can we come in anyway?”

The Odeon closed 10 years ago. It was sold and replaced by a bar called The Knockout, which is still there today.

Nevertheless, I swear to you, I was drinking at the Odeon just last weekend.

Back when the Odeon was open, the guy checking your card at the door was underage. The drinks were watered down, but often free. And the Odeon, which operated 2000-2005, was at the time the only bar booking circus, freak, and variety acts in the city. Its stage was the place where a whole scene got permission to fail in front of a live audience, repeatedly. On any given night you could see pancake jugglers, an all-homeless comedy revue, or musicians deliberately trying to make their act so bad that it would convince the whole audience to leave — kind of a test of wills.

END_OF_DOCUMENT_TOKEN_TO_BE_REPLACED

I’d been inside Dalva, in the Mission, for a couple of hours with Jimmy and Arnold. We’d walked through the long dark dive bar that makes up the front of the place and gone into the “Hideout” in the back, where a whole different bar in a differently designed space serves superb mixed drinks.

We’d climbed up to the little second floor alcove and been joined by some people we vaguely knew. I sipped a delicious black Manhattan as we played “two truths and a lie.” No one believed I’d taken communion at Mother Teresa’s hospice. My friends were buying my drinks, in payment for all the times they’ve come over and raided my carefully assembled Wall of Booze. I declared that one of the people I’d never met was my new sworn enemy — and then I stood up and told the bar in a booming voice that a new dawn of blood and beauty was descending upon us and that only my loyal minions would survive.

The former pro-domme at our table clapped and said she was in if my minions got to wear really great costumes. “Oh absolutely,” I said, sitting back down. “That’s the most important thing.”

“Text me your measurements.” Which is a thing I’d never said before.

END_OF_DOCUMENT_TOKEN_TO_BE_REPLACED 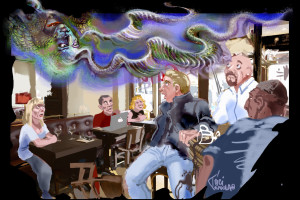 I rarely write a straight up bad review of a bar.  Drinking at a bar should be an active process, not a passive one.  This isn’t a play or a movie, where you’re supposed to sit quietly in your seat.  If you’re having a bad time at a bar, it’s probably at least partially your fault.

They have it coming, and God do I enjoy giving it to them.  Vicious reviews, written well, make for the best reading.

Here are a few bars that had it coming, and got it with a chaser:

END_OF_DOCUMENT_TOKEN_TO_BE_REPLACED

I’m frequently asked by people who say they read my column “What’s your favorite bar in San Francisco?”

How many times to I have to say it?  It’s the only bar I’ve ever described in print as “my favorite.”  And I talk it up every chance I get.  I take friends.  I take out of town guests.

But in case there’s still any ambiguity, let me be clear:  at a time in my life when I never go to bars twice, I go back to SRO all the time.

You should go.  And you should tell the bartender “hi” for me.  Especially if it’s Joey.  You should be so lucky.

But of course SRO isn’t the only good, or even great, bar in San Francisco.  Here are a few others that are close to my heart:

END_OF_DOCUMENT_TOKEN_TO_BE_REPLACED 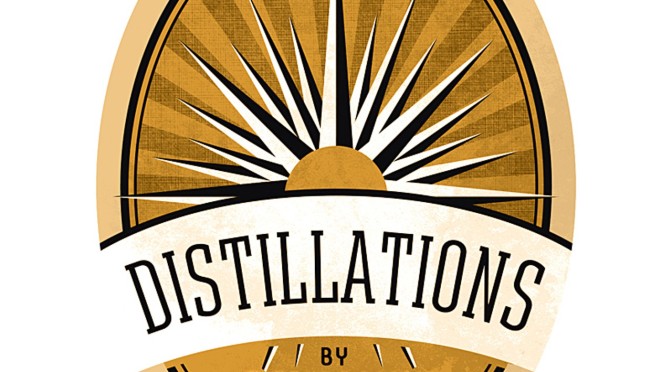