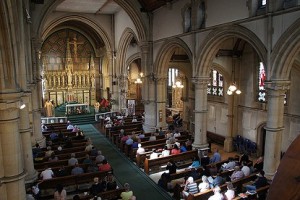 San Francisco parents of children enrolled at local Catholic schools were recently shocked to discover that their children are attending schools run by Catholics.

The discovery was made after the local Archbishop, an official of the Catholic Church, sent letters to local teachers employed by the Catholic Church, reminding them of some of the things that the Catholic Church believes in. Those things offended many San Francisco parents, who say they were horrified to discover that the church which they have asked to educate their children might be influencing the way their kids think.

“I had no idea this was really a Catholic school,” said San Francisco mother of two Benita Bentley. “I thought it was just an extremely ironic public school. You know: ‘look at us, we’re so Catholic.’ Like the Sisters of Perpetual Indulgence.”

Local father Greg T., who self-identifies as gayer than you, said that he finds the idea that the Catholic schools are Catholic to be offensive.

“I strongly object to the hateful, oppressive, messages the Catholic church has been constantly sending out for the last 2,000 years,” he said. “So when I entrusted my children to them, I expected better. To find out that the Church which has never accepted me doesn’t accept me … well, obviously I’m going to sign a petition.”

Parents say that the letter sent by the Archbishop, which reiterated that the Catholic church objects to abortion and sex of any kind outside of marriage, among many other things, was “judgy” and “might make people protesting the Catholic church feel that it is not welcoming.” They have signed a petition asking the Archdiocese to change its positions, or at least never mention them where other people could hear about it.

San Francisco father Jon Davidson, who contributes to a local atheist blog, was among the petition’s organizers. “Honestly, I don’t know what’s worse: for the Catholic church to believe in God in their own schools, and expose my child to it … or for the God they believe in to have opinions about things. Either way, this is a violation. I don’t know how this happened. We were all completely blindsided.”

But it’s not just parents who are upset. Local teachers at area Catholic schools say they can’t believe they are being asked not to dispute Catholic doctrine.

“No other employer would punish an employee for publicly protesting their product to their customers,” said mathematics teacher Wilma Marker, who says she finds the Catholic church to be “vile, reprehensible, and come with an excellent benefits package.”

“I disagree with everything they stand for, and use all my summer vacations to undermine their cultural authority, but other than that it’s a great fit,” she added. “I just need them to shift a bit on their doctrines and principles. You know, so I’ll feel comfortable.”

Reached for comment, Archbishop Salvatore Cordileone said he didn’t understand the controversy. “This was not meant to offend anyone,” he said, in Latin, “only to reinforce the iron grip of clerical authority over everyone’s personal lives. I’m sure that if I’m given a chance to explain, calmly and gently, that we will judge the quality of their souls on the basis of their lifestyles, that everyone will fall in line. Trust me: we’re really good at this. It’s what we’re famous for.”

Parents were not convinced. “It’s almost enough for me to send my children to public school,” said Thompson. “But I mean, not really, I would never do that.”