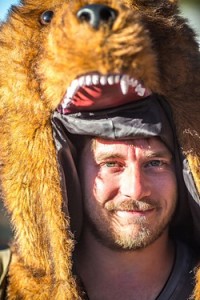 Center for the Environment spokesman Steve Johns admitted that the line between partying and protesting has become almost unmanageably thin.

“A lot of people aren’t attracted to traditional activism anymore, which is why we use colorful costumes and party stunts,” Johns said. “It really helps us get noticed, although, come to think of it, people did keep asking if there was a drink minimum.”

Johns added, “Do you think the strobe light was too much?”

“It feels amazing to drop the bass for a good cause, even if nobody can remember it in the morning,” he said. “Honestly, we must have saved the environment like, six, seven, times now. You’re welcome.”

“I was at the bear thing on Saturday,” she said, “and I left convinced that they were launching an App called ‘Artic Shelf.’ On the other hand, the last Lyft party I attended was raising money to save the redwoods. I guess as long as we’re all using the same buzzwords, what does it matter?”