Gallery offers exhibit to die for with ‘After Life” show 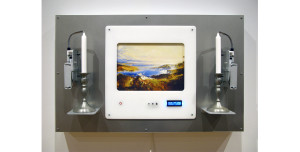 “His Light,” by Fernando Orellana

Would you rather be buried in a coffin or have your ashes become part of a piece of art? If your spirit were to haunt an object, what would that be?

San Francisco is full of talented people and companies trying to hack the most vital design questions of life and living — but an art exhibit now open at the Incline Gallery is tackling the design challenges of the dead.

“After Life,” running through Aug. 8, combines the work of San Francisco artist Al Honig and Troy, N.Y., artist Fernando Orellana into a collection of sculptures that gently offer solutions to the design questions presented by death.

Though differing greatly in shape and size, each of Honig’s pieces — made of found objects about to be melted down for scrap — is an urn for cremated ashes. Some look like robots with blinking lights, others like devices from a 1930s sci-fi movie, others surrealist sculptures. All contain a clear plastic or glass container where the ashes can rest, seeing and being seen from within the art piece. Right now the containers hold wood ash, though no one seemed to be able to tell the difference.

Orellana’s work contains no space for a dead body, but is designed to catch the attention of a dead spirit. He’s picked up items from estate sales that he believes to be of particular importance to the deceased: a hammer used to build a hilltop mansion, a collection of minerals, a mother’s recipes, carefully stored in a small wooden box. These are placed in devices that monitor the surrounding space for sudden fluctuations in temperature, infrared light and electromagnetism. If two or more conditions change rapidly, an alarm goes off and the object gets used: a hammer hits a nail, a candle is lit, a bell rings.

This way the dead can interact with the living without having to learn a new user interface. “They can’t learn, exactly, since they don’t have brains anymore,” Orellana said. “I burned through a lot of really bad ideas trying to figure this out (how to design an interface for people who can’t learn it) before it finally occurred to me: Don’t try to teach them something new. Center the interface around something they already know.”

Born in El Salvador, Orellana can’t remember a time when he wasn’t making something with his hands — “but it didn’t occur to me that people could become ‘artists’ until I was 13 years old.” He received his master’s of fine arts from Ohio State, and is now a professor of electronic art at Union College in Schenectady, N.Y. He is married to artist Mindy McDaniel, and works in media ranging from paint and pixels to robotics and Play-Doh, and he is the recipient of the 2014 Vilcek Foundation dARTboard award and the 2009 New York Foundation for the Arts Fellowship in Digital/Electronic Arts.

Al Honig moved to San Francisco from Maryland in 1981 and set up an artist’s workshop in the Bayview that he still works from. A high school dropout, he made his living as a printing press repairman until 1988, when he became a full-time artist after a run of successful shows in San Francisco and Los Angeles. Largely self-taught (“I took six drawing classes to sketch better. It didn’t help”), he has worked on public sculptures with prominent Bay Area artists like Brian Goggin and Pepe Orzan, and helped create large-scale art at Burning Man for nearly 16 years. He lives in the Outer Mission, and plays swing music on the flute.

The two artists sometimes offer starkly different visions of death. Honig’s pieces often include switches and knobs — they’re designed to be touched, to let the living interact. But when gallery visitors start trying to touch Orellana’s work, to run their hands over a mineral collection or turn a lever, he had to go over and ask them to step back. “These aren’t for us,” he said. “They’re for them.” The art only works if the living don’t interfere.

The differences were noted by Deric Licko, 44, of San Francisco. “I like the anthropomorphism of the found art sculptures,” he said referring to Honig’s pieces. “They’re very whimsical and fun. The kinetic ones are interesting, but I feel like you’re always waiting for something to happen.”

His friend Nick Jacobs, 27, of San Francisco jumped in. “I think that’s the point,” he said. “We’re all waiting.” He was pleased with what he found. “In a tech city, it’s nice to see something like this … a little bit more religious, I guess you could say.”

Both artists say they believe in life after death. “Yes,” Honig responded, immediately. That’s why the containers are clear, after all. Orellana hesitated more. “I think there’s something,” he said. “But I suspect that all our ideas about it are wrong.”

The Incline Gallery space was once a mortuary: One can see the scuffs that gurneys left on the wooden floor, and there is a pipe in a wall leading to a former cremation room. Like the exhibit inside, it is a reminder of just how art and death can build from each other in unexpected ways. Curator Valerie Leavy placed one of Honig’s sculptures, a small piece with metal “wings” coming out of each side, underneath the gallery’s sole skylight.

“It reminds me of a phoenix,” she said. “Especially with the ashes inside. I keep picturing it flying up into the light.”