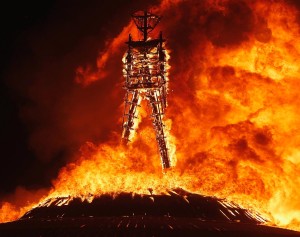 The playa was rough and even with my flashlight it was too dark to see the bumps in front of my wheels.  Every jolt was a surprise, and instead of relaxing into the ride it made me stare at the ground even harder, as though I could pierce the darkness by concentrating.

That’s how I almost missed the flaming altar, and the cluster of people around it.  I nearly biked right into them.  They were whispering to each other and nearly missed me too: one of a million near collisions that happen at Burning Man every day, averted at the last minute as I veered off to the east and hit my breaks, coming to a bumpy stop.

I turned and shone my flashlight on their backs.  There were maybe seven people huddled around an altar with a small flame, and behind them were three large towers.  Maybe climbable.  Either they’d appeared out of nowhere, or I had.