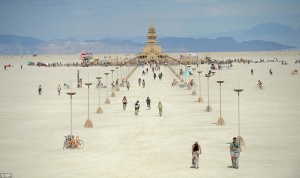 She said she’d stepped out of the RV because her camp-mates were having a big argument on their way into Black Rock City.  She’d just intended to give them a little space … but then they’d driven away without her.

They didn’t have a pre-planned camp spot.  They could be anywhere.  They had her food and water and clothes.  It was her first Burning Man.  She didn’t know anybody else.  She came to our camp (well, my friends’ camp) because it was a radio station, and wondered if we could put out a call asking for someone to help.

But that’s not why we started calling her “Lost Girl.”

We put her on the air and she started crying when she explained what happened to her, and at that moment she was an honorary member of our camp.  (Well, technically “their” camp since I just hang around here because the couches are really comfortable.)  Everything changed on a dime.  Everyone was resting, it was the middle of the afternoon, I was flirting with Charlotte and getting somewhere for the first time – and the moment her tears hit the ground everybody had something to do.  Get her a beer;  get her blankets;  find her a sleeping bag;  put aside some food;  give her a hug;  tell her that no matter what it’s going to be all right.  I’d never seen the ranks close so quickly.