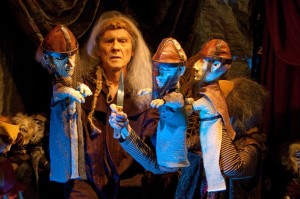 (This review originally appeared in The Exhibitionist)

Talented people often do baffling things. Sometimes this turns them into aesthetic heroes; sometimes it leads them down extraordinary dead ends. As an ordinary mortal, I’m not sure the world really needed a production of King Lear featuring two live actors and over 30 puppets. I’m reasonably sure that this is not a direction theater as a whole will ever move in. It will not become the Next Big Thing.

But since it exists, I am very glad to have seen it. Brilliant dead ends are far more inspiring than mediocre successes, and The Independent Eye company’s version of King Lear, playing at The Emerald Tablet every weekend through April, is anything but mediocre.

Independent Eye theater principals Conrad Bishop and Elizabeth Fuller are, unquestionably, geniuses, which makes their art harder to pin down. In fact, it’s probably better not to think of this as “The Independent Eye performing King Lear” as The Independent Eye making King Lear the medium through which they perform their own art. In order to do this, they have to turn most of the fundamentals of King Lear on their head.

King Lear usually times out at a brutally long three-plus hours (“I always go to the bathroom before seeing Lear,” a woman ahead of us in the ticket line declared). The Independent Eye’s Lear is a tight 100 minutes – with long sections of text obviously pulled out and key plot points summarized. And King Lear is a sprawling play, but the set occupied by this Lear is miniscule: slightly larger than a big photo booth, with room enough for two actors to sit without getting cramped. Even in San Francisco, it could fit in your living room.

As Drama, Lear is about as straight as tragedy comes. Independent Eye’s puppet king is periodically self-aware: there is a stunning moment when the Jester, played by Fuller (as a human), who up until now has been sarcastically providing the narrative summaries, points out that s/he never appears in the play again. “Perhaps I’ve been killed?” she asks. It’s surprisingly affecting.

King Lear has a massive cast, and technically this production still has all the characters – but obviously the vast majority of the cast has been reimagined. All this makes it minimalist on a scale that Shakespeare rarely gets: the major battle scene simply involves Fuller showing us a series of linked paper men and then ripping them apart, while shouting “Kill!” (It plays better than it sounds.)

But if the experience is minimalist, it is also lush, with a number of fairly avant-garde lighting and sound cues packed in; one should really add the light and sound to that cast of over 30 puppets. They earned it in ways Shakespeare probably never could have imagined.

Perhaps in an acknowledgement that this Lear isn’t really about Lear, The Independent Eye recommends one not even bother trying to follow Shakespeare’s extensive plotting in this production:

“The best way to view King Lear, to our minds, is to see it as a dream and go with the flow,” they write in the artists’ statement. “It’s easy to get lost in the thicket of plots and proliferation of dukes & earls, but the power of dream is in what’s evoked by the images along the unmapped journey.”

So at that point you’ve actually removed much of the “Shakespearean” plot devices, too. Effectively you’re watching a puppet dreamscape in a box, and the dream you’re having is surprisingly King Lear like.

The end result is an experience that manages to heighten many of the essential emotional beats of Shakespeare’s play: all that compactness makes the fundamental cruelty of the interactions more cruel, and the tragedy more tragic. Everything else just falls by the wayside. The strange interactions between characters happen dozens of different ways: hand-sized puppets talking to hand-sized puppets, a human-sized puppet using a real person’s arm talking to hand-sized puppets; a human head surrounded by finger puppets talking to the other human actor — the only time the two humans speak without intermediaries is when the Jester speaks to Lear himself, and that ends around the half-way point.

Occasionally this is less effective than one would want: I hate to say this, but the puppet sex was deeply disappointing. More often, however, it lends a strange choreography to the proceedings that is intricate in the fast moments and devastating in the slow. When the puppets bow in sync or when they all fall away and suddenly leave Bishop’s Lear alone on stage to rage against his inevitable fate, it is that much more powerful because the tiny stage now feels immensely empty, and the rawness of his strong portrayal is sharpened by the extra hour-and-a-half of dialogue that they’ve removed.

It’s neither Lear as Shakespeare intended it, nor an abbreviated version nor a “puppetized” version in any conventional sense. I’m not entirely sure how the hell to describe those Lear-themed dreamscape 100 minutes they’ve put together, but I know that if you go you’ll see two masters who have perfected their craft.