Theater Review: ‘Blithe Spirit’ at the Actors Ensemble of Berkeley 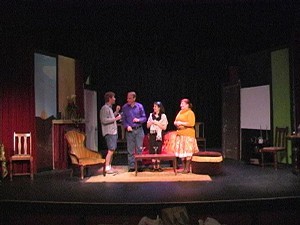 (This review first appeared in “All Shook Down”)

Noel Coward does not haunt us from beyond the grave. Though once the toast of mid-20th century London and Broadway, most theatre-goers in the 21st century would be hard pressed to name even one of his plays. There is no surer sign that a once enormously influential dead artist has had a stake driven through his heart.

It’s not for any lack of genius on Cowards part: he was every bit as talented as near-contemporaries like Bernard Shaw and Ibsen, who remain marquee names. But where they represented social movements, Coward represented a sensibility. We can still turn to Shaw whenever we want to condemn the hypocrisy that pushes that mass of mankind to poverty – a problem still very much with us. We can still turn to Ibsen when we want to critique the stultifying claustrophobia of domestic life, an issue that is very up to date. But who’s going to turn to the Coward, the master of drawing room conversation, where we no longer have drawing rooms?

A Coward play like Blithe Spirit, playing through August 21 at the Actors Ensemble of Berkeley, lacks everything that a socially conscious play requires. There’s nothing resembling a moral, or even a conscience. While good and evil are acknowledged, the only sin is to be dull. No one learns a relevant lesson. No pressing issue is examined: the audience does not have its awareness raised. Though Coward was once a pop-culture playwright, his scripts are in no way au courant: trying to make Coward contemporary would be like trying to tweet Heidegger.

What one immediately grasps, watching Blithe Spirit, is that these are not flaws: they are eternal virtues. A Coward play is a safe space from everything – from Airbender to Jersey Shore – that makes contemporary entertainment reprehensible. Blithe Spirits makes no promises, and keeps them all in the most interesting way possible.

Charles Condomine (Stanley Spenger) is a novelist whose beloved first wife Elvira passed away at a young age, and who isn’t entirely unhappy about it. (“I think she had a great talent for divorce,” he says, “it’s a pity she died young.”) He and his second wife Ruth (Shannon Veon Kase) throw a party at which local psychic and crank Madame Arcati (Chris Macomber) is invited to hold a séance for a room of unbelievers.

Instead Arcati inadvertently summons Elvira’s ghost (Erin J. Hoffman), who once arrived won’t depart. Worse, as a spiritual one-hit-wonder, Arcati can’t make her go away. Elvira doesn’t like Ruth, Ruth doesn’t like Elvira, and what follows is a cross between a domestic farce, a supernatural farce, and a murder farce. Nobody gets what they want, in life or in death, which also makes it a documentary.

Coward’s lead characters are winter orchids: it takes actors of great presence and great restraint to make them bloom. Alone, the members of the cast often stumble. As an ensemble, however, they are stronger than the sum of their parts: the timing and characterizations are always sharpest when more than two characters are on stage at once. This effect is particularly noticeable when family friends Dr. George Bradman (John Hurst) and Violet Bradman (Jeanette Sarmiento) are present: though small parts with only so much to do, they seem to bring out the best in everyone, and everyone has shining moments. Macomber is a strong presence who manages to pull off hysterical and spooky at once, and Hoffman’s physical comedy is both hysterical and threatening.

The best parts of Blithe Spirit involve these kinds of contradictions: Director Hector Correa displays a subtle hand for letting situations and characters have rough edges and multiple facets. It would have been very easy to let any one aspect of the play spiral out of control; but control in the service of entertainment is a hallmark of the drawing room. (Coward’s own cabaret act was once described as “romping fastidiously”) It’s a knack we no longer have, and it shows. Hollywood’s unrestrained approach spends billions to create blockbusters that nobody remembers after a week: it takes just the right sensibility to create a masterpiece that nobody remembers after 70 years.