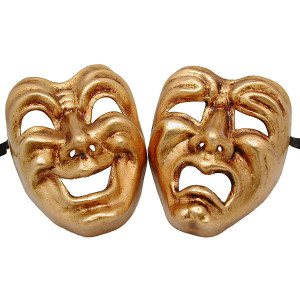 Brevity is the soul of wit, and just because you only have 250 words to write a play review doesn’t mean you can’t knock it out of the park.

Some of my favorite reviews have been capsule reviews.  Here’s a sample of some of the productions I’ve had the good fortune to rave about in short form in the pages of the SF Weekly:

“Giant Bones” (at the Exit Theatre)

By rights, the premiere run of Giant Bones is where everything could go wrong. Its structure is a play-within-a-play-within-a-play. It’s a fantasy, filled with unfamiliar elements and species. It has a large cast whose characters are difficult to keep track of (one is frequently referred to as Blond Ingénue, another as Brown Ingénue), with each actor playing multiple parts. Intimidated? Better to be intrigued: It all works. Giant Bones is that rare play that does everything perfectly. The plot, a collection of fables woven into the story of how a theater troupe was banished from a city, is easy to follow. The script, based on short stories by Peter S. Beagle, is engaging, funny, and profound (in that order), and the actors have great fun chewing the scenery in the first act and turning in deft and nuanced performances in the second. The set is minimal but evocative; the sound cues are superb. Okay, the theater was too warm — that didn’t go right — but everything else makes for a high-energy, thought-provoking show. I’d suggest keeping your programs so you can say you were there, but audience members get a free, limited-edition Beagle book as a memento. See? Giant Bones just nails it.

It’s tempting to call this new production A Streetcar Named Desire‘s triumphant return to the stage. But, of course, Streetcar never really left. It’s such a piece of Americana that even if you’ve never seen it, you know the tropes by heart, much the same way that even if you never formally learned the national anthem you still know where the high notes are. But make no mistake: The Actors Theatre production is triumphant. Not only does this taut, intense show do author Tennessee Williams justice, it also does him proud. Between superb direction and across-the-board standout performances, every one of his perfectly balanced scenes of culture clash and human frailty realizes its potential. Iconic moments like Stanley Kowalski (Vlad Sayenko) standing on a balcony shouting his wife’s name over and over again (“STELLA!” — Jennifer Welch) live up to the impossible expectations half a century of performances have given us. The only reason not to see this production is if you’re faint of heart: Williams wanted you to leave shaken and distressed. The Actors Theatre brings his vision to life, and leaves you stunned.

To appreciate the Shotgun Players’ adaptation of Schiller’s 18th-century play, Mary Stuart, you must consider the set. It has two doors, three video screens, a mirror, a white board, a one-way window, and a sliding section of floor. The stage must be so involved to distract us from the fact that for nearly two hours nothing happens on it. The blocking is simple verging on primitive: Characters enter, they talk, someone leaves. That’s it. The few times (you can count them on one hand) they actually touch each other are so shocking it’s electric. But the electricity is real: The dialogue, semi-adapted for modern times, shines — and the actors carry a charge. Mary Stuart features superb performances, especially from Peter Ruocco (Lord Burleigh) and Scott Coopwood (Count Leicester). The compelling character conflicts and parallels with our own time make the dramatic tension in a story whose outcome we already know — how Queen Elizabeth I of England came to undo her cousin Mary Queen of Scots in 1587 — nothing short of intense. When Burleigh, speaking for the state, says, “We don’t torture,” the crowd just has to laugh. The conflict between morality and politics is sadly contemporary.