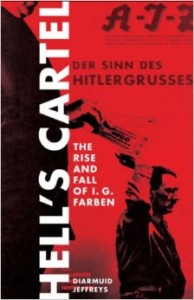 By today’s standards, Carl Bosch and Carl Duisberg were not good men. Even by the standards of their peers, early 20th-century German industrialists, they were ruthless.

Heading two of the world’s largest chemical companies — BASF and Bayer, respectively — they were part of the industrial coalition that pushed for Germany to start World War I because it would be good for business.

When the war took a turn for the worse, their companies were the first in history to manufacture chemical weapons. When labor was at a premium, they even tried using slaves at their factories — though when the captured soldiers and civilians of other nations refused to work, Bosch and Duisberg declined to execute them.

When the war ended, German industry was at the mercy of hungry foreign conquerors. Bosch and Duisberg combined forces with the other giants of German chemical manufacturing to form a cartel called IG Farben, a hungry conqueror in its own right — and the subject of “Hell’s Cartel,” Diarmuid Jeffreys’ extraordinary history of the German chemical industry’s collusion with the Nazis.

What’s most fascinating about Bosch and Duisberg, who
respected virtually no ethical lines, is that they alone among all of Germany’s leading Aryan industrialists wanted nothing to do with the Nazis after they took power.

Their early support of the Nazis quickly turned to contempt, even though the two had everything to gain from this association: Germany was at their feet if they would only look up to Hitler. Their fellow IG Farben executives were lining up around the Reichstag to get favors, honors and graft. Their company, through a series of flukes and bad decisions, depended on the Third Reich for its profit margins — yet Bosch and Duisberg eventually decided not to play ball. Duisberg retired to his palatial estate and refused to lend his support, while Bosch resigned and made anti-Hitler remarks in public throughout the 1930s.

Why were these men, when faced with the greatest evil of their time, the only ones among their peers who saw it for what it was? We’ll never know the answer, and it’s one of the few fascinating questions to remain unanswered in “Hell’s Cartel.”

Writing in a breezy tabloid style that belies the extraordinary depth of his research, Jeffreys tells the story of an industry that began with synthetic dyes and ended with Zyklon-B. Though easy to read and difficult to put down, “Hell’s Cartel” spares no detail in appraising the factory of the horrors that would eventually supply nearly all the essential materials for Hitler’s army. Even Auschwitz was funded by the private efforts of IG Farben, which planned to use slave labor to create synthetic rubber and fuel. The SS actually complained that their management of prisoners was vicious.

The leading IG Farben representatives (minus Bosch and Duisberg, who both died before the war began) mostly were acquitted in the Nuremberg courts — despite massive evidence of collusion. Even those who were given jail time returned to positions of great industrial prominence in cold-war West Germany when their sentences were up. Sadly, this book might be the only accounting humanity ever receives.

It is to Jeffreys’ immense credit that he can write all perspectives simultaneously: making us understand, and even empathize with, the concerns of the men who desperately needed a concentration camp to be built on schedule, while never losing sight of what a horrifying undertaking this was. By the end, I felt an absurd pang of longing for Bosch and Duisberg — men who, for all their faults, at least weren’t genocidal. Bosch used his first meeting with Hitler to ask if the Nazi leader would reconsider his policy on Jews. There was no second meeting.

Jeffreys keeps an appropriately safe distance from contemporary politics, never asking the obvious question, but it was on my mind when considering the wartime collusion of government and business: Since Blackwater and Halliburton have become globally synonymous with American industry, how are we stacking up now?

It’s another question we’ll have to answer for ourselves. But this book can only help.