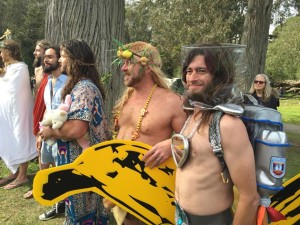 “We’re reeling from the news,” said spokeswoman Sister Gloriana Rimjob. “Obviously we had no idea until the pictures surfaced.”

The Bay Area Reporter obtained pictures of the newly selected Hunky Jesus wearing a button down shirt in a church, where he lit candles and even took sacraments in what critics call “a completely unironic way.”

Condemnation was swift and harsh.

“I’ve seen the photos, and there’s no question that this sick bastard was getting forgiveness for his sins,” said local queer activist Thom Ferris. “You can tell by the way he’s dressed that he was just asking for it.”

The Sisterhood’s Facebook page was likewise filled with angry comments.

“I’m not so concerned for myself as I am for the children who will look up to him in his role as Hunky Jesus,” posted San Francisco mother Tess White. “So many Christians are pedophiles, you see it in the news all the time, the churches are always in one scandal or another, I just don’t want to take any chances.”

At first the Order took a “wait and see” approach to the controversy, posting that “We intend to reserve judgment until all the facts are in. This could have been an elaborate piece of performance art, an audition for a reality TV show, or even a deeper level of irony than we have yet encountered. There’s simply no way to know until we see what he Instagrams.”

But as criticism mounted, the organization changed course, announcing that it had reluctantly determined that Hunky Jesus was no longer worthy to wear the crown of thorns. His 48-hour tenure as deity was even briefer than the shortest papacy on record, the 13-day reign of Urban VII in September 1590.

According to a press release the Sisterhood released yesterday, “We are shocked and saddened that anyone would try to take a special event like our Hunky Jesus pageant, which is sacred to so many San Franciscans, and publicly approach it with a spirit of reverence and sincerity. This open disdain for everything we openly disdain ought to be meta in a cool way, but instead is devastating to our community full of people who just want to be left alone to mock other communities in peace. Obviously based on this new information, we have no choice but to sever our relationship with Hunky Jesus 2015, and declare that we were leering at him, not with him.”

Appearing emotional and distraught, Hunky Jesus told reporters: “I am innocent of the crimes they accuse me of. But the Sisters don’t care. They’re sacrificing me to politics. They don’t know what they’re doing. But I will return.”

He added, “If only there were a metaphor I could use to explain how they’re treating me. But I don’t think there is.”