Book review: The right stuff?: Rabbi not wrong in defense of human spirit 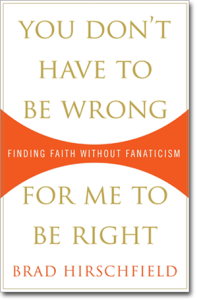 There are already dozens of ways to say “You don’t have to be wrong for me to be right,” starting with “Judge not lest ye be judged,” “Never judge a man until you’ve walked a mile in his moccasins” and “Two wrongs don’t make a right.”

Of them, “you don’t have to be wrong for me to be right” may be the clumsiest and least aphoristic. It’s also the title of Rabbi Brad Hirschfield’s new book about tolerance. Someone should have told him that any book that sets out to prove a cliché is pretty much doomed from the start.

If you have ever thought, “Hey, religion can be pretty good” and “fanaticism can be pretty bad” in close proximity, you already understand his message. But fortunately for Hirschfield’s readers, this book is not really about what it purports to be about.

Hirschfield, it turns out, is a fascinating guy. Born into an Illinois home of what we would now call “cultural Jews,” he forced his family into a series of ethical dilemmas when he announced in the seventh grade that he was now Orthodox. He wore a yarmulke in spite of his grandmother’s open scorn and asked his mother to keep a kosher house despite the fact that his favorite food — until weeks before — was shrimp cocktail.

Instead of going to college, Hirschfield became a settler in Hebron at 19, packing an automatic weapon with his teffilin when he went to pray at the Temple Mount. He danced joyously in the streets, shot out the sides of buses and thought no sacrifice would be too much for Greater Israel.

But when three settlers he knew opened fire into a Palestinian school and killed two children in 1983, he realized he was wrong.

Hirschfield’s journey from Jewish fanaticism to scholarly Judaism and back to the Orthodox rabbinate is an extraordinary one. But that’s just part of what makes this book a gripping read.

Although he never quite says it outright, Hirschfield is a passionate defender of the human spirit against the idea that a religion is best when it is cookie-cutter. His religious journey made him more idiosyncratic and individualistic, not less, and he fights vigorously against the idea that believers have to be clones of each other.

Hirschfield takes an infectious joy in human individuality, and whether he’s discussing religiously inspired tattoos or the idea that maybe there should be a blessing for shrimp cocktail (even if he never ate it again), his digressions and anecdotes read like a triumph of the human spirit. “The uniformity that we so often fight for as lovers, parents, nations, and religious traditions is the opposite of the infinite unity that inspires us most,” he says in an aside that ought to be on the first page.

It’s only when he gets back “on point” about “you don’t have to be wrong for me to be right” that you roll your eyes and think, “Yeah, this occurred to me in fifth grade and seemed really radical — then.”

The philosophical half of this book may be a clichéd failure, but the other half is a rip-roaring page-turner. In the spirit of tolerance, I am willing to accept the first part in order to be delighted by the second. My mother taught me to do that. And so, it turns out, did Hirschfield. But he has a much better story about it.