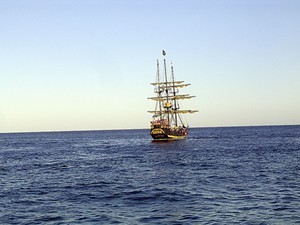 Admit it: last time you tried going all futuristic with giant, technologically advanced, catamarans, and it was a disaster. Only four teams could afford to join, and two of those sucked. Nobody cared, and almost nobody watched.

That’s because you went the wrong direction. Rookie mistake. For the next America’s cup, San Francisco demands that only old-timey ships circa the 1830s be allowed to participate.

Think about it: Those ships are relatively cheap to build, so every nation and nautical club on earth could join. More importantly, it would be awesome.

If you put an armada of tall ships with colorful sails out in the harbor, and have them race each other around the Bay, with the crews dressed like pirates, singing sea chanties and flying contemporary versions of the skull and crossbones, the people of San Francisco will turn out in force.

We will also be in costumes, and will purchase all the shitty mementos, team tri-corn hats, and locally sourced, artisanal, grog, you can possibly provide.

2. All ships enrolled in the America’s Cup competition must have functional cannons, and use them against each other in the races, for points

The problem with holding your boat race in San Francisco is that there are lots of things more exciting to watch than a boat race — and San Francisco has all of them. This is a city where sex is a spectator sport, Mr. Ellison.

But once those tall ships start shooting at each other with real cannons? That’s a spectacle. We’ll watch that. Half of us will cheer our asses off, and the other half of us will protest. But we will all be there.

Don’t bother protesting about the potential loss of human life: Your America’s Cup already killed someone. And that was by accident, off camera.

If you’re not going to cancel the America’s Cup when someone dies, then do let’s do this right. Let’s make death and injury a meaningful feature of the sport, the way NASCAR and football do. Just because we’re liberal doesn’t mean we don’t like to see people get hurt.

3. An America’s cup ship that captures a Google vessel wins its race.

Ships must be free to invade or sink all Google transports on the water for extra points. It may sound savage, but trust me, if this happens even once, San Francisco will erupt in an all night bacchanalia the likes of which has not been seen since the heights of ancient Rome. You’ll be a legend in pubs across the bay.

Any America’s Cup ship that captures or sinks the mysterious “Goolge Barge” automatically wins the America’s cup. This is non-negotiable.

Trust me: you can’t buy this kind of publicity.

4. Occupy Oakland gets their own boat.

This is just to see what happens. The truth is they’ll probably spend the whole time arguing about who gets to climb “the people’s mast.” But wild cards like this one are exciting, and their very presence will add a social justice component that’s been obviously lacking in previous America’s Cups.

5. Any boats that are left over after the race get turned over to the city for affordable housing.

Question: “How is hosting The America’s Cup good for San Francisco?”

Last time you didn’t have a good answer for this: You pulled out some bullshit about how our hotels would be full during the race. Don’t try to patronize us, Mr. Ellison, we’re San Fran-Fucking-Cisco. Our hotels fill up if there’s a good DJ playing on Thursday night.

But next time your answer will be easy: “Any of the ships that don’t get sunk by cannons or Google employees, you can afford to live on.”

Suddenly, we’re listening. Suddenly, hundreds of thousands of San Franciscans are watching every race, hoping against hope that the tall pirate ship with two-bedroom cabins for only $800-a-month survives to the end.

Will we live on that boat even though it’s an 1830 style pirate ship once owned by a Russian oligarch? Fuck yeah we’ll live on that! Studio apartments start at only $600.

The city gets extra revenue from the rents, we get to live here another year, and you get the best boat race in history. A spectacle that will be talked about for hundreds of years. And you’ll be a civic hero.

This is a limited time offer, Mr. Ellison. So act fast.