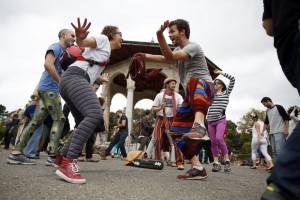 Ten minutes later, the dance party was gone. To know where, you had to go with it — or have a police scanner. That Sunday, as a good number of the 50,000 people in the Bay to Breakers got naked and drunk in the streets of San Francisco, the Oakland police were working to shut down a sober dance party in a public park.

This was a Decentralized Dance Party, or DDP. The brainchild of Canadians Ryan Stomberg and Gary Lachance, Decentralized Dance Parties are disarmingly simple: You create a low-powered FM transmitter, and strap it to someone’s back. The transmitter is connected to a phone or iPod that plays music; you get dozens of boom boxes or radios and tune them all in to the transmitter; and then you get lots of people in absurd costumes to carry the radios around, dancing through public places, inviting everyone to join.

No cover charge, no complications, all fun. Started in 2010, Stomberg and Lachance have held DDPs in more than 50 cities across the world, and actively encourage others to hold them. Since moving to San Francisco in late 2014, newcomer Michael Ryan Garcia has tried to create a DDP movement here and has attracted hundreds of people to two San Francisco DDPs. Most people find out about where the next DDP is via social media and word of mouth.

The Sunday DDP was a joint venture with Ecstatic Dance, an Oakland group that holds regular indoor dances. It was their seventh anniversary party, and they loved the idea of a mobile event.

“I was at the Valentine’s Day DDP, and it was amazing,” said Ecstatic Dance organizer Tyler Blank. “We danced right into the pillow fight at Justin Herman Plaza; we danced through Embarcadero Center; and we picked people up along the way. People just walking down the street would say, ‘What’s this?’ and we’d say, “Come join us!’ and suddenly there would be more people dancing along, having a good time!”

By the time the Oakland DDP reached its second stop along Lake Merritt, however, Oakland police Officer Tyman Small was on hand trying to figure out who was in charge and how to shut it down.

Small said there hadn’t been any public complaints, but the Oakland Parks Department — apparently aware of publicity for the event — had sent the police e-mails that the DDP wasn’t permitted and needed to be shut down.

A dancer leaped up at Small and pinned a white flower to his uniform, but Small was undeterred, explaining to Garcia and Blank that the event could get ticketed — repeatedly — the longer it went on, raking up cumulative fines, if it didn’t disperse, now.

“You need a permit for amplified music in the park,” Small said, “also for a gathering this size” — although he could not say either what size of gathering required a permit or how many people actually were at the DDP by this point (a rough count suggested 80 — they’d picked up people since the gazebo).

“It’s a great event,” Small said. “It’s peaceful and looks like everybody’s having fun. But you’ve got to get the paperwork.”

That’s a sticking point. DDPs are part of a movement called “open source partying” that doesn’t do sponsorships or permits. They refuse to ask permission for dancing in public or having so much fun that strangers want to join.

“Even if we could get a permit, we wouldn’t,” Garcia says. Neither of his previous DDPs in San Francisco, which were both bigger and louder, got in any trouble with police.

But this crowd in Oakland wasn’t going to fight. The music was shut off and the people gradually dispersed: The Ecstatic Dance anniversary party was moved to a member’s home.

“It seems like Oakland is just looking for money,” said dancer Clair Foster, dressed in a unicorn outfit. “There are kids and pets here; we’re obviously peaceful; the idea that we need to pay for a police escort is absurd.”

But as Garcia was gathering up the radios to schlep home, a curious thing happened: normally one or two go missing after an event. This time? He had two more than he started with.

“That’s weird,” he said, scratching his head. But it’s a good omen for the Bay Area’s next DDP.