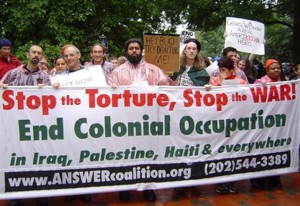 The radicals respond (though not in an organized fashion) that all of these issues are interrelated: That the systemic dynamics of oppression manifest in multiple ways and that it’s this fundamental dynamic that must be opposed all at once – in Palestine, in Greece, in San Francisco, and everywhere else.

The result is the creation of what I’ve called the “liberal ur-issue,” wherein everything we don’t like is seen to be exactly equivalent of, or even identical to, everything else we don’t like. It’s all one thing.

I formulated the concept at an activist meeting where California’s agriculture policies were compared to: The war in Iraq, No Child Left Behind, apartheid, global warming, and (of course) Nazi war atrocities.

It’s true that there are large-scale system dynamics at work, but this attitude becomes a problem when you use it to turn people off of the fight for marriage equality just because they don’t believe Proposition 8 is as bad as Hitler.

It also begs the question: Who do you protest to? If the problem is not one person, or agency, or government – but the system sum total – then who exactly has the power to flip a switch and make it better? Do we really have to remind anyone that Gavin Newsom, Ron Dellums, and the BART police can’t force Israel to make concessions? Because they can’t. It’s not in the city charter.

What’s so confounding is that protesters know this — and they do it anyway. Even knowing that you can never become a popular movement if you scorn the populace, they go out of their way to alienate the very people they say must be reached. They call themselves a global uprising while insisting on being an elite cadre, having protests no one will want to join that are aimed at no one in particular.

The simplest, Occam’s Razor-style, explanation is crass stupidity – but this doesn’t really fly. Many of these protesters are clearly smart, or at least they use big words convincingly. More to the point: Even stupid people like to win. The whole point of the way these protests are organized is that they will NEVER win: Specific problems can be solved, but the liberal ur-issue will never go away – especially not by local action. It’s too big, too amorphous, and too nonsensical.

So if they don’t want to win, what do they want?

The answer, of course, is to protest: They want to protest, and it doesn’t matter to them if they accomplish anything. In fact, it’s better if they don’t, because then there will be more to protest.

This is a movement of “tender misanthropes” – Florence King’s term for people who mask their hatred of humanity through idealistic crusades that make people miserable.

Protesters who don’t want to win can’t bring themselves to say “I hate people,” or “I want to see things burn” because their vanity demands that they be morally superior: Saying “I will make people suffer until all the world’s suffering is ended,” however, gives them both the chance to look down on others AND be an S.O.B for as long as they like.

The more they stick to just one subject, the more of a risk they run that something will actually be solved; for a tender misanthrope, that’s not a risk worth taking. Helping people is just an excuse for making them miserable.

It’s important to keep this in mind because protesters like these always claim the moral high ground because whatever their tactics, their cause is just. This false claim makes society hold its condemnation, the media give them more attention, and politicians allow them more latitude.

They don’t deserve it, and they shouldn’t get it. Someone who breaks the law in a protest designed to do nothing about a terrible injustice should, if anything, be treated all the worse for kidnapping the hard work of those who actually give a damn.

The rabble of tender misanthropes who have hijacked activism in the name of the liberal ur-issue are not out to save us, they’re out to get us – and a healthy body politic owes them nothing but contempt.