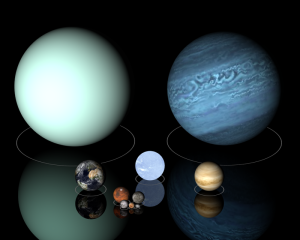 Once there was a species of animal that looked up at the stars and tried to find the rules that governed them.

At first, because it could not see very far, the species made rules that governed 9 planets and a few hundred stars – all it could see in the night sky.  Then, after hundreds of generations had passed, empires had risen and fallen, and a few advances in the development of lenses and mathematics were preserved against famine, plague, and fashion, a few monks realized that the universe was in fact much bigger.  When viewed more carefully, through the correct lenses, the universe contained more stars in the sky than there are grains of sand on every beach in the world.

Their fellow animals did not take this news well, and many monks were burned at the stake and others were imprisoned deep underground for speculating about what these facts could mean, but their cause was taken up by literary men of imagination and the knowledge kept alive across countries, preserved in letters on parchment snuck across borders during times of war, until eventually new ideas about what the immense size of the universe could mean began to lose their power to shock, and were debated openly in the courts of kings.

The new knowledge led to the very upheavals the ancient inquisitions had feared.  The impossibility of the narrative imagination to adequately summarize the scope of the universe led to numbers and calculations seizing primacy over words and poetry.  Just as the earth was revealed not to be the center around which every star revolved, new forms of government emerged which did not revolve around the nobility, but instead numbered every man (one) and gave him a vote, and tallied the results.