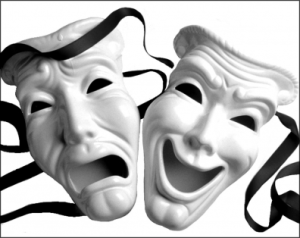 San Francisco Theater writer Lily Janiak once called me “San Francisco’s most lacerating critic,” but in fact I try to keep my really, really, bad reviews few and far between.

But when I do get to use all my claws… oh it’s such fun.  And there’s nothing better than a short form review to force you to get to the essence of a problem.

Here are a few capsule reviews (250 words or less) written for the SF Weekly about shows I have loathed:

“Round and Round the Garden” at A.C.T.

The nicest thing you can say about American Conservatory Theater’s production of Alan Ayckbourn’s Round and Round the Garden is that the set is gorgeous, with green grass and ivy-covered walls, and the actors really try. They commit. The physical comedy is exceptional. But what can you do in a British sex farce without a climax? The plot, loosely speaking, is that there are three couples in a country estate for the weekend. Norman (Manoel Felciano) wants to fuck every woman there; they all secretly want to fuck him, even though they’re married, or are his wife’s sister, which is inconvenient, but what can you do? If this sounds banal, your hearing is excellent. The characters as written aren’t people so much as parodies of British stereotypes, from a comedy of manners written in the 1970s and adapted for the BBC by a very earnest graduate student. There’s nothing that comes close to a recognizably human motivation, and the characters behave as they do because that’s how characters should, according to “Playwriting 305: Structure of Farce.” Just don’t blame the set designers or the actors, who are trapped in a bad marriage and giving Round and Round the Garden far more than it deserves.

“Andy Warhol: Good for the Jews” at the Jewish Theatre

A great performer can be his own worst enemy if he looks in the mirror too much, and in his newest show, Andy Warhol: Good for the Jews?, Josh Kornbluth gets lost in reflection. While technically an examination of what Warhol’s enigmatic “Ten Portraits of Jews” means, Kornbluth’s monologue begins as a scattershot stand-up comedy routine (“Can you believe somebody paid me to do this? What’s the deal?”) and turns into an exercise in petty narcissism. Yes, his subject has always been himself (and his father), but what was profound in Love and Taxes is incestuous in Andy Warhol. For 90 minutes, Kornbluth can’t get out of his own way: Every time he threatens to say something interesting about the world, he interrupts it to tell us more about himself. The show’s final line actually concludes that whether or not Warhol was good for the Jews, he was good for Kornbluth, which really is the final word on everything for this production. Sure, it offers a few laughs and gasps — especially if you like bad puns — but this warmed-over therapy session leaves you wanting to change the subject.

“Speech and Debate” at the Aurora Theater

Speech & Debate looks suspiciously like the first draft of an afterschool special about conservative sexual hypocrisy, written by a teenage Larry David after a double shot of espresso. Focused on three high school students — all of whom are struggling with sexual or social trauma, all of whom say traumatically clever things in a script that constantly winks at the audience to make sure we’re on its side — Speech & Debate misses an essential point about adolescence: Teenagers don’t care passionately about sexual issues because they’ve been traumatized; they care because they’re teenagers. Instead of just letting them care, the play reduces its characters to a set of issues to be dealt with, then puts them through a forced therapeutic march enlivened with paint-by-numbers zaniness. There are plenty of laugh lines, great production values, and a hilarious dance routine, but in the end these characters would be much more interesting if they had learned from their trauma instead of just talking about it. No person of conscience can be bored when people, even in fiction, are explaining how they ended up raped and/or molested, but we can recognize lazy character development. To see what Speech & Debate is trying to do, watch Glee.