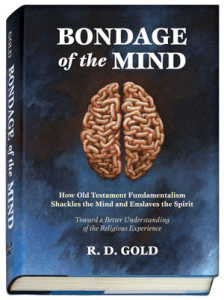 Thought of 10 reasons God doesn’t exist? That’s a book. Got an fMRI scan of monks praying? Book. Clipped a few news articles about fundamentalists doing stupid things, such as believing in God? Book. And possibly a sequel.

The result is the publishing equivalent of “America’s Funniest Home Videos” doing a God episode: You get a lot of priests falling down; philosophy that begins and ends with a sound bite; science done badly; and a concluding monologue in which a lesson, taken out of context and probably not true, is given.

R. D. Gold’s book on why the Old Testament is wrong falls squarely into this categorical mess.

The basic premise of “Bondage of the Mind: How Old Testament Fundamen-talism Shackles the Mind and Enslaves the Spirit” is sound: Archaeological evidence overwhelmingly contradicts the Torah as a work of history. But Gold is bringing this to the public’s attention in much the same way that someone hectors busy people every four years for not voting. And yes, OK, one supposes we’ll have to keep repeating it until the public cares.

No one should confuse electioneering with thinking. Gold — a pseudonym for a Bay Area author — litters the book with fallacies that any sharp member of the high school debate squad could catch.

Most grating is Gold’s offhand reference to “Darwin’s Naturalist Maxims,” three rules stating that all life is continuous from one source and nothing supernatural ever happened. But Darwin never set down “maxims.” So where did Gold get them? He doesn’t say.

Surely a book dedicated to historical authenticity should be more careful.

Truly bizarre is Gold’s repeated explanation for why we don’t need God to have absolute standards of right and wrong. He writes: “There is an enormous body of brilliant philosophical thought, from Plato and Aristotle down to Hume and Kant, to which all serious modern philosophers subscribe, that holds: (1) yes, there are absolute standards of morality, but (2) no, they do not necessarily have to come from God.”

Who are these secular modern philosophers who believe in absolute standards of right and wrong? He doesn’t name one, probably because the idea is anathema to modern philosophy. Most modern ethics spring from existentialists (such as Jean-Paul Sartre and Albert Camus) and pragmatists (such as John Rawls and Richard Rorty) — all of whom deny even the possibility of measuring morality in absolutes.

More important, how can Gold cite the collected works of Plato, Aristotle, David Hume and Immanuel Kant as proof when these philosophers fundamentally disagreed with each other?

Plato believed in absolute morality because it came from “platonic forms” — the essences of things (which were, incidentally, divine).

Are we supposed to believe in those? Aristotle didn’t. To the extent that he believed in absolute morality (a questionable assumption), it came from his belief in a kind of human soul.

Does Gold want us to believe in that? Hume didn’t. Hume didn’t believe in absolute morality, either. Gold is flat out wrong there. And Kant? Kant was a Christian who wrote his major work as a refutation of Hume. His whole philosophy is set against Hume’s skepticism.

Neither Western philosophy writ large nor individual philosophers have said what Gold claims.

Put such howlers together (Gold is ignorant of medieval history, plays fast and loose with Basque culture, mangles Baruch Spinoza …) and for all the archaeology that Gold gets right, it looks suspiciously like he’s willing to burn the school to save it.

If the choice is between supporting Gold or the boorish fundamentalist rabbis he puts himself up against, then sure, I’ll take Gold, who at least will give me freedom of conscience.

But I can read whatever I want, and if you compare Gold’s work to that of the recent titans of intellectual theism — such as Reinhold Niebuhr, Thomas Merton, Huston Smith and Thich Nhat Han — you see how deeply impoverished “Bondage of the Mind” is.