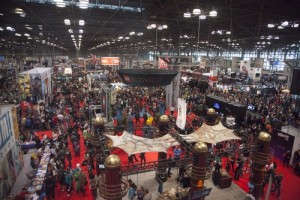 This week Apple co-founder Steve Wozniak announced that he will be co-producing the first ever Silicon Valley Comic Con, where geeks can celebrate an art form they are helping make obsolete.

“The presentation of information in a non-digital format is over,” said Facebook VP of Epistemic Closure Harry Sealowe. “Libraries, publishers, book stores will all be extinct in 10 years. And I am so excited to go trade comic books with the people who are making this happen!”

Sealowe, like many other attendees, is a huge fan of the TV shows based on movies based on comic books.

Google employee Tad Sun, is one of the thousands who have already signed up to attend. “You really haven’t experienced characters like The Black Widow until you’ve downloaded a picture from a still shot of her guest appearance on Agents of S.H.I.E.L.D that tied in to Avengers 2,” he said. “No other medium can adequately convey what this character is about.”

In a promotional message on the con’s website, Wozniak said the Silicon Valley Comic Con would be different from other cons, because in Silicon Valley fans can properly celebrate “the Age of the Geek.”

Conference spokesman Tom Cronun said this means that while thousands of women and minorities will apply to go to Comic Con, virtually none of them will be accepted, because they’re just not good enough.